No more shark paranoia: 5 facts that will ease your fear of sharks

Enough with the shark paranoia fed from the media. With the rise in technological consumerism, such as GoPros and drones, news coverage has been more focused toward shark sightings, causing people to mistakenly assume that there are more sharks in the water. Rather, they have always been around. The only difference now is that people have the technology to document. Certainly, sharks pose danger to those who enter the ocean, but so do other sea creatures, such as sting rays and seals. Anyone who enters the ocean must know that he or she is entering a wild environment that is home to wild sea life. Open water swimmers and surfers must be aware of the difference between SeaWorld and the ocean. The open sea is not an environment to fear, but one to respect. The most efficient way people can respect the ocean is if they educate themselves. Here are five shark facts that will answer some of your lingering questions regarding sharks.

Sea lions, fish, mollusks and even other sharks are a few of the sea creatures that sharks prey upon. The reason sometimes sharks bite humans is because we are mistaken for seals. In order to prevent a shark from mistaking you as its meal, it is advised to enter the ocean on a sunny, clear day. That way, a shark will have better vision differentiating between you and a seal as opposed to when the water is murky.

The good news is that sharks also eat stingrays. This predation helps our surfers and instructors in reducing the chances of getting stung from a stingray, which is more prevalent than getting attacked by a shark. Instructors are more likely to get stung because they are the ones walking along the ocean floor without a surfboard, while surfers are less likely to get stung because stingrays like to hide in the sand. Hence, stingrays serve as easy food for sharks because they rarely surface, making the ocean a safer environment for surfers.

2. The sharks seen off our coast are juveniles.

Sand tiger sharks are most common to our waters. Their name indicates that they stay near the bottom of the ocean, briefly swimming to the surface for air. Growing about 100 cm in length as juveniles, they are harmless. These sharks are extremely shy, making it an effort to avoid humans. According to an article from the OC Register, the juvenile great white sharks that have recently been reported on the media are being studied by Cal State University, Long Beach marine biologists.

3. There are no reports of a shark attack at Bolsa Chica State Beach.

Out of the 180 shark attacks dated from 1900 until present day throughout North America’s Pacific Ocean, only four have occurred in Huntington Beach. However, the Shark Research Committee considers a shark mistakenly bumping into a surfer while looking for fish to be an attack. The recorded “attacks” from Huntington have never resulted in any injuries. The committee also shows no record of any sharks attacks from Bolsa Chica.

4. You are more likely to get struck by lightning than get attacked by a shark.

5. Dolphins and sharks do not get along.

Sharks rarely attack dolphins, which is why dolphins are thought of to be guardians of the sea. A dolphin’s “bumping” behavior typically keeps sharks away from them. Since dolphins travel in pods, an individual shark can easily become intimated by a pod of dolphins. This is reassuring because dolphins can be seen almost every day in front of our camp. 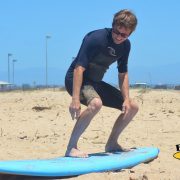 You down with the Foam Tops!? 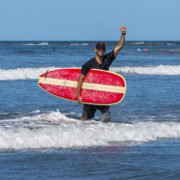 Why the long board is chairman of the board 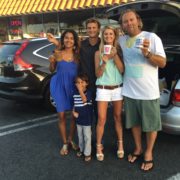 The surprises of being a surf school business owner 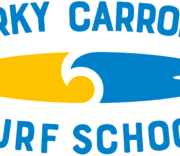 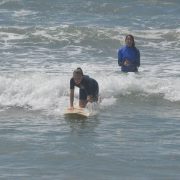