One of the most common questions we get asked is what is the best surfboard for learning to surf. Answer: a soft top surfboard. Thanks to their improved buoyancy, soft tops make paddling and standing up easier, letting you catch more waves and have more fun. They are also safer than hard top boards because getting hit with something soft is always better than getting hit with something hard. (That’s just math.) But what many beginner surfers don’t realize is there are a lot of great options out there for soft top surfboards. So instead they head over to their local mega superstore and pick up a Wavestorm Costco Surfboard.

But take it from us, that’s not a good idea.

Costco: Your One Stop Shop (Except for Surfboards)

We love Costco. Cheap gas. Fifty pound bags of popcorn. Free tastings. It’s heaven in a warehouse. Where else can you buy a pair of board shorts, get some photos printed, have an eye exam, prepare for a barbecue, find a computer, and stock up on enough toilet paper for a decade — all while feasting on a free lunch of mini-sausages, Vitamix smoothies, and microwavable empanadas.?

Over the past couple years Costco has also become the king of selling soft top surfboards. Their Wavestorm model is the most popular surfboard in America. Head down to the Huntington Beach pier on a mid-summer Saturday and you’ll see a flurry of them heading out …. and then getting washed ashore.

And while there’s definitely a place for a Wavestorm in any surfer’s quiver, a beginner would be better off looking elsewhere than Costco’s line of soft top boards when first getting started.

Let’s get one thing clear. Riding a Costco surfboard doesn’t make you a kook. Neither does learning to surf. So long as people respect their gear, the ocean, and others around them, the waters are free for all to enjoy. Everyone makes mistakes and wipes out. That’s life. No worries. It’s how you approach the waves that really matter.

Even seasoned surfers can mess up from time to time. Dropping in on other surfers? That’s wrong no matter how long you’ve been surfing, or how good you are. But most experienced surfers know better. Those hitting the surf for the first time usually don’t, and are more likely to make the mistake of taking a wave that someone else has priority on. Odds are they are also riding a Wavestorm.

And that’s why Costco surfboards sometimes get a bad rap.

Costco makes it really easy to get a board. Maybe a little too easy. And over the years they have gained a certain association with kookdom. That’s because the majority of people riding Wavestorms are beginners. Beginner surfers are often linked to being “kooks” because they are still figuring out the surfing etiquette and lifestyle. Put two and two together and you can see how Costco surfboards can gain a certain reputation.

But we don’t buy into that reputation. The point we want to make is Costco surfboards aren’t necessarily bad, they just are not right for beginners.

There is a great quote that sums up our motto perfectly.

The best surfer out there is the one having the most fun.

That’s what it is all about. The lessons, the equipment, the waves — it all boils down to having as much fun as possible. In the past, soft top surfboards had a certain stigma. They were frowned upon by surfing purists who thought soft tops bucked the trend of tradition. Not to mention, they made surfing more accessible, which in the already overcrowded lineups can be a regular surfer’s greatest fear.

But this is nothing new. There has always been those reluctant to embrace change.

Foam surfboards were initially balked at by those loyal to their 40 pound balsa wood boards. When shortboards arrived on the scene they were seen as a joke by longboarders. Using Jet Skis to catch big waves was paramount to cheating. Hydrofoils were considered a novelty act. And then there’s the Chip.

Back in the 50s, shorter, thinner boards with more-defined rockers came out that made learning to surf easier and more forgiving. They became popular with California’s growing population of female surfers. At first, guys chided these “girl surfboards” for being too small and delicate. That is until they tried one for themselves and instantly fell in love. Soon these “girl surfboards” helped fuel the Surf Boom and provided the model for one of the most famous surfboards of all-time: The Malibu Chip.

The same thing is happening to soft top surfboards today. Although they may have been originally designed with the beginner surfer in mind, seasoned surfers are starting to enjoy them too. So much so we wrote a soft top surfboard guide for every level of surfing. Because every surfer should have a foamie in their quiver.

Why? One reason. They make surfing more FUN!

The Pros of Costco Surfboards (and Soft Tops)

There is a time and a place for everything, and that’s certainly true for Costco surfboards. They can be really fun, in the right conditions. Have you seen the Wavestorm World championships? Turns out even pro surfers are getting kooky with Costco Surfboards. But these members of Team Wavestorm know what they’re doing, and learned to surf the right way first on boards suitable for the task.

That’s because Wavestorm surfboards are better for someone who already knows how to surf. Their thinner shape and squatter tail make it easier to loose control while on a wave, allowing for some gnarly maneuvers and just as gnarly wipeouts. That’s why Wavestorms are for experienced surfers, who can take advantage of this loose performing board and tap into their full fun-releasing potential.

Which is why we recommend against using a Costco surfboard when you are learning to surf. After you figure out the fundamentals, then go ahead and tackle pipeline on a Wavestorm.

The Cons of Costco Wavestorm Surfboards

Costco stocks other board besides Wavestorms. But since they are the most prominent, popular and widely used, especially by beginners, it’s important to understand why Wavestorms in particular are not ideal for learning on.

The top reasons being:

Each of these contributes to losing stability, float and buoyancy while on a board. Which are some of the most important features required for beginners to properly learn.

Also, there is a reason why Wavestorms are so inexpensive. They are priced according to quality and scale, and built with less durable materials. The means they break down quicker than stronger constructed soft top boards. 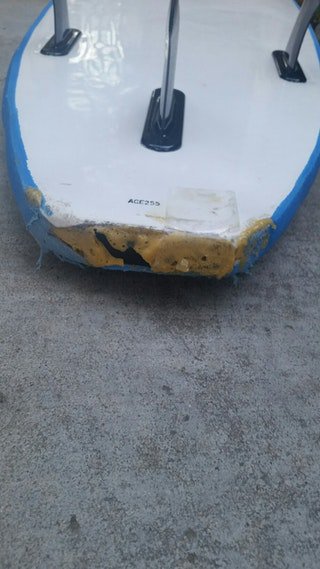 While for someone looking to have short-lived fun that might be enough, a dedicated beginner surfer will want a board that allows more room to progress. Not to mention one that can take a beating.

What’s In a Board?

Whenever you buy or rent a surfboard you should give serious thought to what the board is made of and its dimensions. For example, when buying a hard top surfboard knowing whether it is glassed with epoxy vs fiberglass, or shaped using polyurethane vs EPS foam, makes a big difference. The length, width and thickness of the board matters too.

The same level of consideration should be given when choosing a soft top board. Soft tops are not just for beginners. Every level of surfer from novice to intermediate and advanced can benefit from having a soft top in their quiver. So long as it is the right model for them.

Just like you need to choose the right surf spot to learn at (which is why we hold our surf school at Bolsa Chica), you need to find the right board to start with. The result is a much safer, and funner, experience all around.

A beginner should choose a board that is suitable to their skill set, height and weight, and can survive the initial mishandling that comes with trying something new for the first time. Not just go with whatever Costco has on its shelves for the best price.

The Soft Top We Use Instead of Wavestorms

At Corky Carroll’s Surf School we teach surfing using Storm Blade Surfboards. This model has been around since 2006 providing some of the best high-performance soft top surfboards on the market.

Storm Blade is produced by AGIT Global, which is actually the same company that puts out Wavestorm surfboards. But there is good reason why you find their sturdy Storm Blade’s being used at a lot surf schools and surf camps around the world, and not their thinner Wavestorms.

Not only do Storm Blade surfboards come in a wider selection of sizes for all skill levels, but Storm Blade’s strong yet forgiving, extra buoyant foam layered construction and well calibrated thickness make surfing an unparalleled experience for beginners to advance. Overall their design with beginner in mind and use of high-quality materials provides a perfectly balanced wave-riding platform to surf.

All this will have any novice standing up in no time, and is why recommend an 8ft or 9ft soft top surfboard with as much width and thickness as possible for beginners. Our favorite surfboard to learn on in the industry is the 8ft Storm Blade SSR. 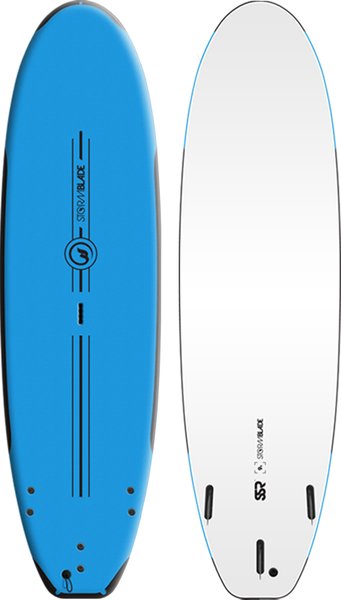 This might all sound like an over-fluffed up endorsement, but we feel really strongly about the boards we use for our surf lessons and truly find Storm Blade’s to be the best. But like we said earlier, there is no one-size fits all when it comes to surfboards. There are plenty of other great soft tops out there (some of which we include in our surfboard rentals quiver).

We want everyone to have fun surfing. And we want beginners to learn the right way. So think twice about that Wavestorm $100 Costco surfboard if you’re just starting out. The better choice is to learn on a higher-quality soft top.